Sony smartphone fans in America have a good reason to celebrate today. Here at CES 2014 the company just announced plans to sell the Xperia Z1S via T-Mobile in the US. Starting January 13, T-Mobile subscribers can scoop up the sleek, stylish, and waterproof Android handset for no money down and a commitment to pay 24 monthly payments of $22. 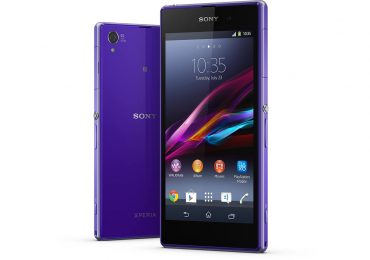 If you have a soft spot for Sony’s current Xperia lineup of mobile devices then you’ll quickly warm up to the Z1S. It uses the same jet black color scheme, sharp lines, and silver accents gracing the Xperia Z, Xperia Z1 and Z1 Ultra. I do like this Xperia design language which manages to be both sober yet sophisticated. The premium aesthetics of the Xperia Z1S do come at a price, however, namely glossy and highly reflective surfaces which also attract finger grease and prints like its going out of style.

Measuring a svelte 0.34 inches thick by 5.74 inches tall and 2.91 inches wide, the Xperia Z1S is quite pocket-friendly as well. Indeed it’s way more practical to grip and operate in one hand than Sony’s behemoth the Xperia Z1 Ultra. With the exception of a dedicated camera shutter key on the right edge, Sony keeps the phone’s physical controls to a minimum too.

A circular, silver power button and thin volume rocker are the only other hardware keys. To keep them protected from the elements, the Xperia Z1S hides its micro SD card and SIM card slots along with Micro USB port behind stiff flaps. Up top is the 3.5mm headphone jack while the device’s bottom lip houses a trim but long stereo speaker. 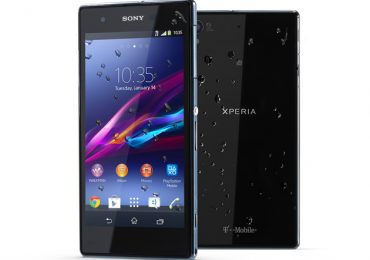 With a full HD resolution of 1920 by 1080 pixels, the Xperia Z1S’ big 5-inch display is bright and renders crisp text and images. The screen’s colors looked vibrant as well, though its LCD technology can’t match the eye-popping hues and high-contrast of Samsung’s OLED handsets. And in the short time I spent with the device it was clear that viewing angles drop sharply when not viewing the screen head on.

Fearless of spills and grime

Thanks to Sony’s dedication to give the world water and dust resistant smartphones, all it takes to get the Xperia Z1S sparkly clean is a quick rinse. Just like the company’s other Xperia gadgets, the Z1S is able to withstand submersion in water and exposure to rain and dirt particles.

Around back you’ll find the handset’s main 20.7 megapixel camera and LED flash. Sony also touts that the Xperia Z1S uses its more premium G Lens which it claims is superior to ordinary camera phone glass (though I bet its constructed from quartz or clear plastic).

Equipped with a feature-rich camera app, the Xperia Z1S boasts lots of shooting modes and special effects such as HDR, burst mode, and face detection. The most interesting to me though is what Sony calls Background Defocus, essentially a way to artfully blur the background while keeping subjects in the foreground clear and crisp.

Sony grafted its own proprietary skin on top of the Xperia Z1S’ Android 4.3 Jelly Bean software. Inherently Sony’s special sauce isn’t too distracting but I much prefer stock Android which is more intuitive and easier for me to navigate.

Driving the phone’s operating system is a robust 2.2Ghz quad-core Snapdragon 800 processor linked to 2GB of RAM. You also get a standard of 32GB of internal storage, a roomy amount especially considering the micro SD Card expansion slot.

All in all the new Sony Xperia Z1S looks to be a very tempting smartphone deal and sure to be an excellent addition to T-Mobile’s lineup. On the surface it seems to have the power, features, and design to lure some American handset buyers back to the Sony brand.

That said, I’m concerned about the Z1S’s display which didn’t seem as attention-getting as other devices from Samsung and Motorola. And surely a great deal depends on how well Sony’s fancy camera performs under pressure, specifically in low light. In any case I can’t wait to get my hands on this US version of the Xperia Z1 to judge for myself.

Next Post How to preview PDF files in Windows Explorer